Investing is both an art and a science. There are passionate supporters of a wide range of investing methodologies and the research can be tweaked to support various approaches.

When considering the index fund investing approach, there are considerable ways to view the idea that it’s difficult if not impossible to beat the long term market averages. Following are several investing myths, from a valuation informed approach.

What do you think of these investing myths, are they accurate or not? 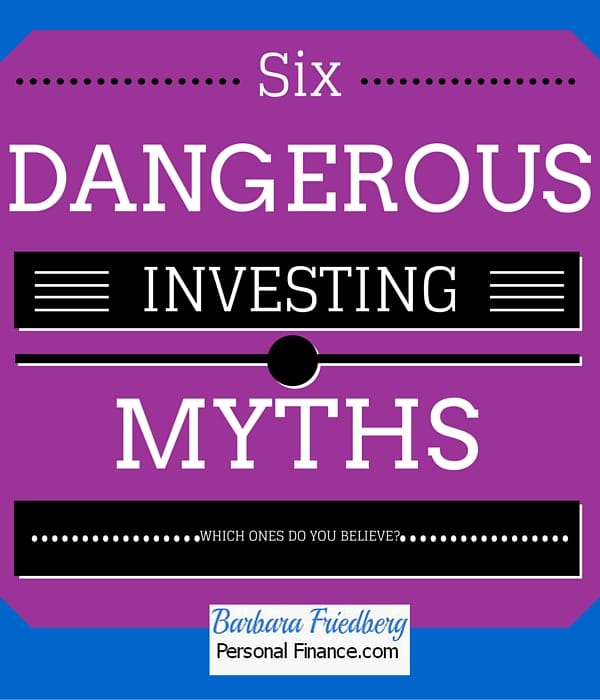 Mr. Bennett advocates Valuation-Informed Indexing. This strategy calls for the investor to increase his stock allocation when prices are low and to decrease his allocation when prices are high. The concept is rooted in the research of Yale Economics Professor Robert Shiller, who found that, contrary to the widespread belief that market timing doesn’t work, long-term returns are predictably poor starting from times of high valuations.

Set forth below are six items of investing wisdom viewed as truths by Buy-and-Holders but as dangerous investing myths by those who root their strategies in Nobel Prize winner, Robert J. Shiller’s research findings:

Investing Myth 1 – Market Timing Doesn’t Work. Buy-and-Holders believe that the market is efficient; that is, all information known to affect the market price is incorporated into it at all times. It follows that market timing cannot work; no one can effectively guess how unforeseeable events are going to play out.

Valuation-Informed Indexers believe that investor emotions are the primary influence on prices in the short term and that economic realities become dominant only after the passage of 10 years or so. If this is so, long-term returns are highly predictable (prices move in the direction of fair value). Under the new understanding of how stock investing works, timing is not only possible but required; investors who fail to change their stock allocations in response to big price shifts thereby permit their risk levels to get wildly out of whack.

How to Invest and Get Rich Slowly>>>

Barb’s comment; Actually, maintaining a constant asset allocation will do this for you. When one asset class becomes overvalued, you will rebalance by either selling the overvalued asset class or putting future cash into lower valued assets.

Investing Myth 2 – Economic Developments Cause Stock Price Changes. Did you know that Shiller predicted a former economic crisis? So did Robert Arnott. So did Andew Smithers. So did every stock analyst who takes Shiller’s findings seriously. How did they perform this magic feat? Valuation-Informed Indexers don’t believe that it is economic developments that cause stock price changes but that it is stock price changes that cause economic developments. The market was overpriced by $12 trillion in 2000. The inevitable return to fair value was going to cause a loss of that amount of buying power from our consumer economy. The crisis became unavoidable once we permitted the bull market to get so out of control.

Barb’s comment; There were indications of an overvalued market before the August 2015 market crash, as well.

Investing Myth 3 – The Safe Withdrawal Rate Is a Constant Number. Financial planners use the concept of the “safe withdrawal rate” to tell us how to structure our retirement plans. The idea is to use the historical return data to determine what withdrawal rate would work even in a worst-case scenario. The conventional studies are rooted in the pre-Shiller research and thus do not consider the effect of the valuation level that applies on the day the retirement begins. Studies that do consider valuations come to wildly different conclusions as to what is safe. In the event that Shiller is right, millions of middle-class people will be experiencing failed retirements in days to come.

Investing Myth 4 – Stocks Are More Risky Than Bonds.This has been the conventional wisdom for a long, long time. But risk is uncertainty. If Shiller is right that long-term returns are highly predictable, stocks are not nearly as risky as we have long believed them to be. If Shiller is right, stocks are a high-risk asset class only for those who don’t take valuations into consideration when setting their stock allocations — that is, Buy-and-Holders.

Barb’s comment: Modern Portfolio research defines risk as volatility. In other words, how much your asset value moves  up and down in price. In general, stocks are more volatile than bonds, although over the long term they have offered much higher returns than bonds. Warren Buffett suggests that risk is running out of money in retirement.

Investing Myth 5 – Super-Safe Asset Classes Are a Poor Choice for Long-Term Investors. The conventional wisdom is that stocks are always best for the long -term investor and super-safe asset classes never provide returns high enough to finance a comfortable middle-class retirement. But a regression analysis of the historical return data showed that at the prices they were selling at in 2000 stocks were likely to provide an annualized return of something in the neighborhood of a negative 1 percent real. In contrast, Treasury Inflation-Protected Securities (TIPS) were at the time paying 4 percent real. That’s a return differential of 5 percentage points per year for 10 years running — a total shortfall for the stock investor of 50 percent of his initial portfolio value.

Investing Myth 6 – Stocks Have Become a Good Buy in the Wake of the Price Crash. There were three times prior to the late 1990s when stock prices reached insanely dangerous (high) levels. On each of those three occasions, the damage done to the economy as a result of the inevitable crash ultimately caused stock prices to fall to one-half of fair value. That’s a price drop of 65 percent from where we stand today (February, 2011).

Do you want to know how to be a singles hitting investment success? Click here

The information contained in this article is the opinion of the guest author and does not necessarily represent that of Barbara Friedberg. Do not construe this information as a recommendation to buy or sell particular securities or asset classes.

This is a guest post by Rob Bennett who created the first retirement calculator that contains an adjustment for the valuation level that applies on the day the retirement begins. His bio is here.

Barb’s question: Do you consider valuations when making investment decisions?