Home » Economics » What to Do With a Pay Raise »

What to Do With a Pay Raise

After the 2008-2009 recession, it seemed like jobs and wages would never turn around.

If you were lucky enough to have a job, then you were doing the work of two employees and afraid to ask for a raise. Working harder for the same money. And you wondered if this is the “new normal”.

As this is not my first rodeo {I’ve been watching the economic markets for decades}, I knew eventually the deplorable job market would turn around. Wages are finally trending upward as unemployment declines. 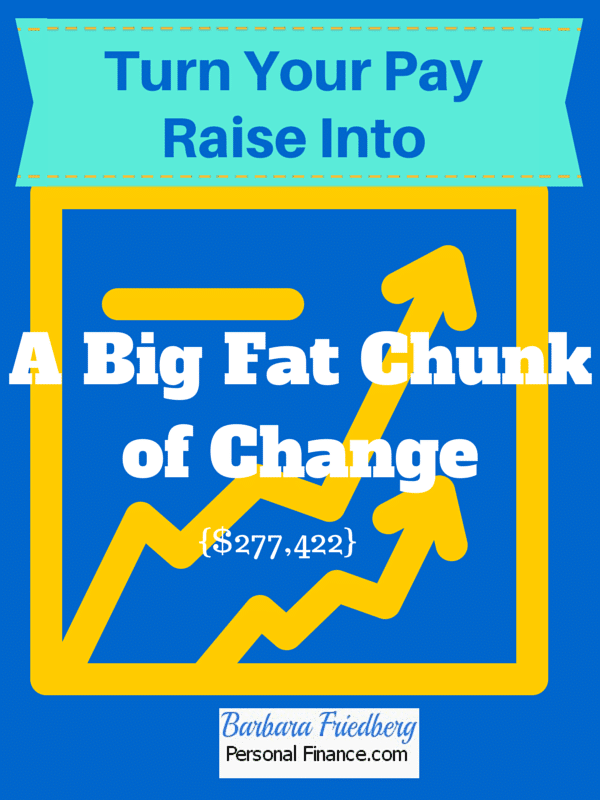 According to Ben Leubsforf, in the recent Wall Street Journal article “Wage Growth Shows Signs of a Pickup”, pay raises are at the highest level since 2008 and inflation remains low.

Do you know how perfect that is?

Frequently, when wages go up, so does inflation, which means that you actually don’t have any more money at your disposal, even though your paycheck is bigger.

But now, you’re actually seeing an increase in your paycheck of 2.6% in the first quarter of this year. Big companies are finally loosening their purse strings. Inflation is tame – with gas at all time lows and clothing still fairly cheap – you have a net increase in the potential for wealth.

So now that your check is poised to go up you may be wondering what to do with a pay raise.

Would you like to know how to turn this small uptick in wage growth into tens of thousands of dollars, or more?

What Not to Do With a Pay Raise

You’ve finally got a few more bucks in your paycheck.

First, here’s what not to do with the pay raise:

3. Go out to dinner more frequently.

4. Move to a more expensive neighborhood.

Now that I’ve shattered your dreams of mansions and BMW’s, here’s why you don’t want to do those things. As the American Psychological Association and Sun Trust Bank both reported in recent survey’s we are worried about money and we’re overspending on eating out and entertainment.

If you want to put a lid on your money stressors and shore up your financial accounts for the future, now is the time!

Resist the urge to “improve” your lifestyle, because this type of behavior never stops. If you need a fancier car now, you may go for a bigger house with the next pay raise. Before you know it, you’re spending more than the pay raise you just got.

Then you end up feeling horrible.

Building wealth is a much better feeling than increasing your house, car and debt obligations.

Think long and hard about what to do with your next pay raise.

How to Multiply Your Pay Increase

Here’s a simple answer to the question, “What to do with a pay raise?”

Joachim’s Strategy to Turn $2,600 Into Thousands

But it’s not enough to put the extra money into a Roth IRA retirement account; actually it’s just the first step. Because now he needs to decide how to invest it. So he decides to make it really easy for himself and he invests the money in a target date retirement fund.

Now one knows what the future holds, so let’s make a guesstimate of the future returns of this fund. Anyone who tells you predicting future investment returns is possible is lying or stupid!

Assume that during the next 30 years this fund averages 8% per year, the same rate it’s earned since 2003.

Remember, we said that Joachim was going to take his one year pay raise amount of $2,600 and invest that same amount every year for the next 20 years. After 2 years, he will have invested $52,000.

Continuing with Joachim’s scenario, he stops investing the $2,600 per year at age 56 (when it is worth $128,500) and just leaves the money invested in the same 2045 Target Date Retirement  Mutual Fund. He doesn’t even look at the fund until he’s ready to retire at age 66!

How much do you think the total $52,000 Roth IRA account, invested in the Vanguard 2045 Target Date Retirement Fund is worth at age 66?

Joachim invested $52,000 over 20 years and stopped. Then he left the money in the mutual fund for the next 10 years and did nothing. With the average 8% average annual rate of return, at age 66 his $52,000 investment increased five fold.

That’s what to do with a pay raise!

If you would like a potential extra $277,422 to spend in retirement, then you may want to take your raise this year, and the same amount of that raise in the following years and invest it.

There’s no guarantee that you’ll definitely have close to $300,000 if you follow Joaquim’s lead. One thing is for certain, if you spend your raise, you won’t have that money in the future.

Caveat; This article is for illustration purposes only and not a recommendation to buy or sell any particular investment. Joaquim’s scenario is for educational purposes and does not suggest a guaranteed rate of return or financial outcome. Please consult your own financial advisor for advice.

What are you going to do with your next pay raise?