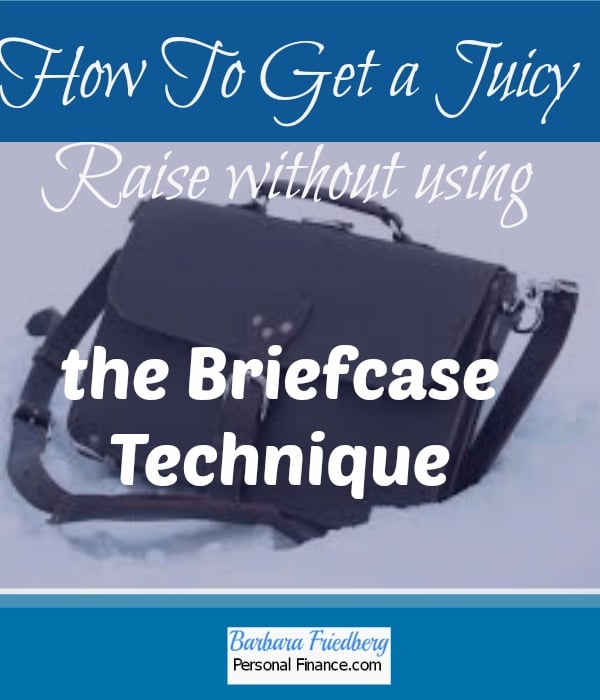 Shilpan’s comments on a recent article, Money Help from Ramit Sethi; How to Get a Raise were so inspired, I invited him to write about how he managed a 40 percent raise. Enjoy his motivating story.

Men + Women-Get a Juicy Pay Raise; Without the Briefcase Technique

This newest research underscores the importance of negotiating for the highest salary you can obtain. According to Venessa Wong’s article in the San Francisco Chronicle, “More Female Breadwinners, Same Old Pay Gap“, only 1 in 4 (women) respondents to a Citi/LinkedIn survey asked for a raise last year.

It is quite likely that if you don’t ask, you won’t receive a raise and there is no downside to asking for a raise.

In the rebounding economy, corporations are accumulating cash. It is a perfect time to ask for a raise. Shilpan wrote this awesome article and I’m reposting it for those who missed it. His strategy for getting a raise is unique and the results were superior. Women and men, give it a try and boost your bottom line.

I don’t blame you if you are scratching your head with this perplexing title. Ramit Sethi is the one to blame for it. He came up with a briefcase technique to negotiate a big pay raise, and I like his creative thinking. This article suggests a subtle twist to the briefcase technique.

I wanted to share how I got a huge pay raise recently. It’s a simple technique at its core — go above and beyond to ensure your supervisor’s success.

Let’s rewind back to fall of 2008. I was out of IT work for three years by then. I took sabbatical to manage a portfolio of hotels that I owned back then. Lehman Brothers collapsed the day I sold one of my hotels. I planned on building a new one, but we were in the midst of one of the worst recessions in the last 50 years.

I decided to plunge back into IT and soon found a decent job. I was doing well, but I was still making about 10 percent less than my last IT gig with Accenture consulting.

How I Got a Promotion and a Big Pay Raise

I am a big fan of the philosophy of Wallace D. Wattles. How much you make is the direct outcome of your targeted hard work to ensure your supervisor’s success.

At every one-on-one meeting with by boss, I focused more on his top three goals. Soon, I found out that he was competing with several others to get promoted to become the Senior Vice President, and obviously that was his prime goal.

Here’s how I did it.

Me: Jim, what can I do to ensure that you get promoted to Senior VP?

Jim: I have a project to create a Spend Visibility analytics application. This application can offer a holistic view of the total spending on our executives with a goal of controlling our costs. But, we don’t have much budget to build an enterprise level application.

Me: What if you allow me to make it happen for you. I won’t let you down. If I do, you can fire me. I will work tirelessly to do what it takes, if you have faith in my talent.

Jim: That’s fabulous. I wanted to warn you that it’s a high visibility project, so we can’t fail Shilpan!

Me: I am gambling my job to convince you that we won’t fail.

I got busy for the next three months. I worked long hours not only during the week, but also during the weekend to ensure that every milestone was achieved ahead of schedule.

I remember that Jim asked me to see him in the midst of this project. I was wondering what was in his mind.

Jim: I noticed that you are working way too much, Shilpan!

Me: I am on a mission. I promised you that we can’t fail. So, I have no other choice.

Jim: I just wanted to tell you that you are an asset for our company. I appreciate all the hard work you do.

Jim was promoted for his acumen to offer a solution to impact the company’s bottom line.

The secret to getting rich {without winning the lottery}-click here.

Even though I was exhausted with the relentless work for almost three months, I felt proud to make a difference. I never imagined or even bothered to ask for a pay raise. But, if you invest in your supervisor’s success — by not only working hard but also risking all that you can to ensure his or her success — you will get promoted with a major salary raise.

Soon after his promotion, Jim asked me to see him.

Jim: Thank you for the hard work. I think you are making way too little for your talent and hard work.

Me: Thank you. It never occurred to me. I am making six figures already.

Jim: Well, I have another offer for you. I want you to manage our data warehouse, and you won’t be disappointed to know that you’ll make 40% more with an additional 20% year end executive bonus.

Me: I am honored.

That’s it. All it took for me was to invest in my superior’s success to get a big pay raise in the midst of the worst job market. And, I know that this technique will work for you if you apply it without expecting any return.

Share your raise stories, when you got one and when you didn’t. Any tips for success?

What Are TIPs Bonds? Pros, Cons And Features

Pros And Cons Of Investing In Physical Gold

Should I Invest In Dividend Stocks Now?