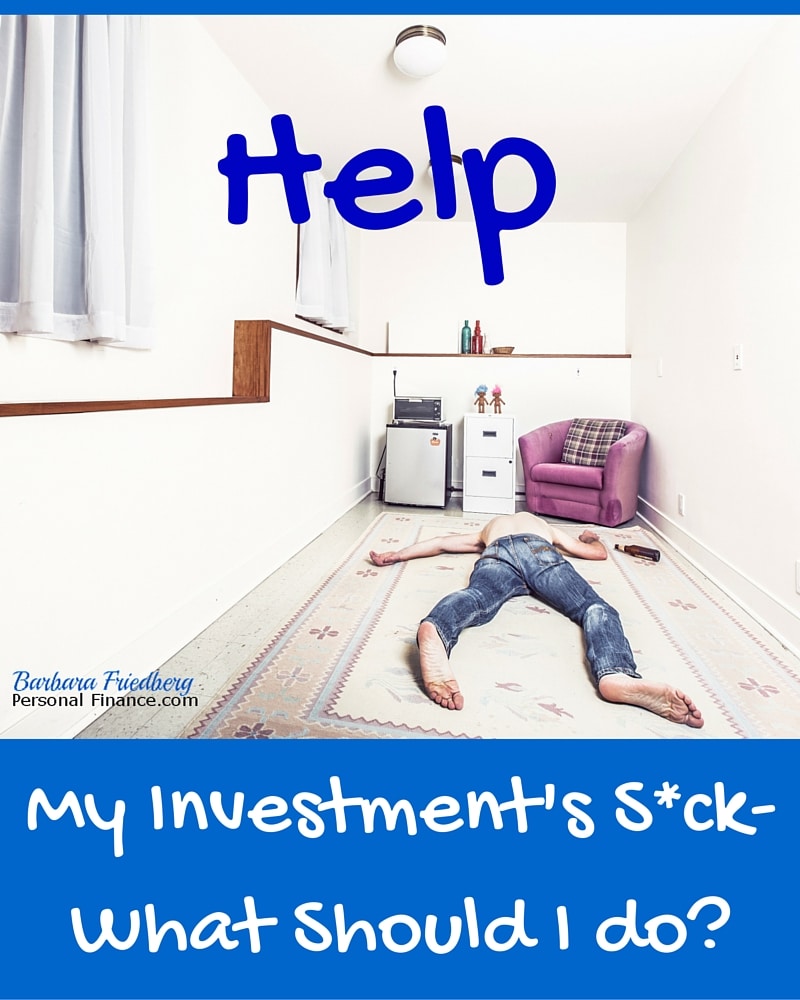 My Investments S*ck-What Should I Do?

Why all the turmoil?

If you believe the media then on Monday the worries were due to global unrest; China’s manufacturing reports were negative and Iran and Saudia Arabia experienced some tensions along with other players in the Middle East. These events give further support that we live in an interconnected world and explains why there is a growing correlation between U.S. and international investment returns.

This wouldn’t be as worrisome if we hadn’t just come off of a disappointing 2015.

I’m in the process of completing the annual portfolio rebalancing that I suggest all investors perform. As I update all of our accounts on Quicken, input the missing reinvested dividends and capital gains, I also focus on the the annual index benchmark returns to see how my returns compared. (I’ll let you know when I finish, how my investments compared with the market indexes.)

When you look at your 2015 returns are you disappointed?

As I stated a few days ago in my 2015 investment round up, returns weren’t good last year:

First off, it’s unusual for stocks and bonds to experience an annual decline, and that’s why you can’t expect the future to perform exactly as the past.

So, where are we?

In 2015, returns were down, but not as bad as some of the worst performing years:

So last years -2.2% returns weren’t the worst of the new millennium, but if you’re an investor, it’s no fun to see the value of your money vanish!

But let’s look at the positives.

Stocks are somewhat overvalued, which means that their price earnings or PE ratio is higher than average. Today, the PE ratio, based on the last 12 months earnings is 21.25. That compares with an average PE ratio of 15.57. If we take the average as the norm, then clearly 21.25 is overvalued. But there’s a famous saying by economist John Maynard Keynes, “the stock market can remain overvalued longer than you can stay solvent”. This means that even though the market is over valued, it may not return to ‘fair value’ any time soon!

If you want support for that idea, take a look at the minimum PE ratio of 5.31 in December 1917 and the maximum PE ratio of 123.73 in May, 2009. Okay, so according to the trailing PE ratio of 21.25, the stock market is overvalued. Consequently, a drop should be seen as welcome since that will make stocks more affordable-with lower PE ratios-thereby giving investors greater future capital growth potential.

So why aren’t investors happy?

Because we hate to see losses on our investment statements!

But sometimes losses are necessary to allow the markets to get back in balance. And if you’re a level headed investor, you can look at a market drop, not as something to be feared, but as an opportunity to buy stocks at cheaper prices.

After all, are you angry when you go to the store and see a “sale” sign? No, of course not. Likely, you pick up a bargain.

My Investments S*ck-What Should I Do?

Just because you believe, “my investments s*ck” doesn’t make it true. Stocks, bonds, and financial market values go up and down. It’s part of the reason that you earn higher returns for your cash in the stock market than in your insured bank savings account. You’re being compensated with higher returns for taking on greater risk.

But as any long term investor knows, sometimes you have to take your medicine. That medicine is a falling stock or bond price.

Don’t do anything when you think “my investments s*ck“. Because if you sell after your investments have fallen in value you’ll be successful at turning a paper loss into a real loss.

So, when you think, “my investments s*ck” don’t run to your computer to sell. Take a deep breath and recognize that you’re in it for the long haul, and that a down year along with market volatility is expected.

But please remember that any money you need in the next 5 to 7 years should not be in the stock market. Put it in a CD or money market account where you’ll be assured of getting back your principal.

Take a deep breath and wait for the bargains to come!

Click here if you want to solve your investing problems.

7 Alternatives To Cash – How To Get A Good Return