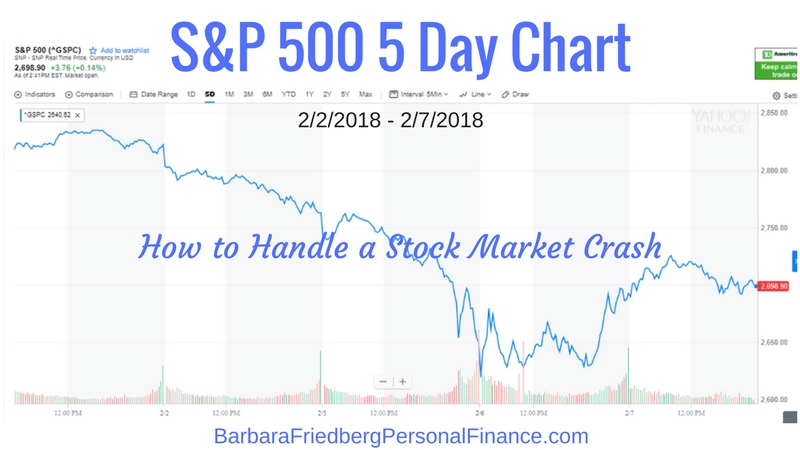 Investors across the globe are trying to make sense of the recent stock market crash. While talking with my aunt on the phone, even my uncle was busy checking his investments.

If you went online to check your portfolio balance on Monday, February 5th you might have experienced delays getting to your investment account. Vanguard, the enormous investment company, locked investors out of their accounts due to the sites volume. The trading programs were so busy, retail investors had little chance of buying, selling or in some cases even viewing their investments.

I crafted advice for robo-advisor investors on Monday entitled, “Why Did the Stock Market Crash and What Should Robo-Advisor Investors Do?”

In fact, during the subsequent days, my advice was proven sound. In short – “Don’t panic!” The stock market has regained much of the ground it lost since Monday. Just take a look at the 5 day chart of the S&P 500 index.

Yet, professionals far smarter than I took to the internet to chime in about the largest DOW stock point drop. But before you read what the media pros are saying about the stock market volatility there are a few things to consider:

Still trying to make sense of the stock market volatility?

Check out what professionals have been saying about the recent stock market crash these past few days.

“The Stock Market Is Now in a ‘Pullback.’ Here’s What You Should Do”

“A stock market slide that has already erased more than 2000 points from the Dow Jones Industrial continued Tuesday, with the Dow falling another 560 points at the market open.

By the end of the trading day, the Dow had swung all the way back and more — up more than 560 points.

But the speed at which the market has bounced up and down has left many investors spooked, especially those who have been lulled by a nearly nine-year-old bull market.

“Market corrections are normal, no matter how nerve-wracking they are at the time,” says Greg McBride, chief financial analyst for Bankrate.com. He adds that investors should “maintain a long-term perspective and resist the urge for any knee-jerk reactions,” noting that the market is about where it was a mere two months ago.

In fact, financial strategists say there are several reasons for worried investors to do one thing: calm down.

Reason #1: This is not a bear market yet.

At the worst point of this sell-off on Tuesday morning, the Dow was down more than 2,800 from the market’s peak on Jan. 26.

That represents a 10.7% decline. That’s well short of an official “bear market,” which is defined as a market drop of 20% or more. But because stocks fell more than 10%, this may be considered a “correction.”……”

“Opinion: The chart reader who called this stock-market selloff says it’s not over yet”

by Howard Gold at MarketWatch.com on February 7, 2018

Investors who watched the Dow Jones Industrial Average swing from a 567-point deficit at its low Tuesday to close up 567 points on the day probably hoped the worst of this selloff was over.

But the technician who predicted back in January that a big correction was coming has four words of advice: don’t be so sure.

Craig Johnson, chief market technician for Piper Jaffray in Minneapolis, who called the current bull market back in 2012, told this column on Jan. 11 that the S&P 500 index SPX, +0.13%  could decline by as much as 20%, primarily because rising yields on 10-year Treasury notes TMUBMUSD10Y, +1.53%  heralded the end of the 35-year bull market in bonds.

“This feels a little too fast from my perspective. We haven’t done anything to reset expectations,” he told me late Tuesday….”

“The robots vs. robots trading that has hijacked the stock market”

By Steven Pearlstein at The Washington Post on February 7, 2018

“It has been comical to watch the parade of guests on the business news channels this week try to explain to viewers, and to one another, why our hyper-efficient financial markets — the ones that are supposed to be so brilliant at pricing the value of everything — have been bouncing around like a squash ball on an overheated court.

Pay no attention to the volatility, these financial wizards assure us. It’s just a little technical correction, a bit of froth being taken off the top of a market that had gotten a little ahead of itself.  The fundamentals of our otherwise sound economy will soon reassert themselves.

The truth is that the market is just as irrational and divorced from fundamentals on the way up as it is on the way down. It is in the nature of markets more so today than ever, as a result of the computerized high-frequency trading strategies of the Wall Street wise guys. What we’ve watched this week is herd behavior on steroids…..” 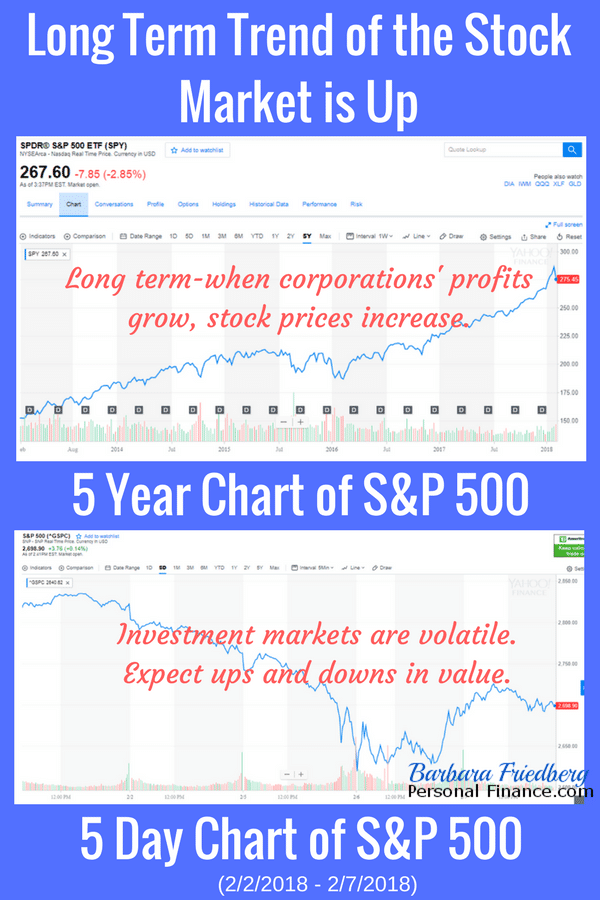 “What Was Really Behind the Stock Market Selloff?”

By Jon Sindreu and Mike Bird at the The Wall Street Journal on February 6, 2018

“In financial markets, too much calm can breed disquiet. Many investors say that is what happened Monday, when long-successful bets on rising prices and low market volatility turned awry.

While fears about inflation and rising bond yields have played a role, analysts say much of the equity-market slump can be explained by other, less fundamental factors—raising hopes that stock markets will recover and continue to do well against a backdrop of robust economic growth and beefy earnings.

Here is why some market strategies could have turned eager buyers into distressed sellers:

•Investors have been betting heavily against swings in the U.S. stock market to generate extra income.

Traditionally, many investors bought futures on the Cboe Volatility Index, or VIX, to protect against market volatility. However, after two years of extreme calm, few were doing much protecting. Data from the U.S. Commodity Futures Trading Commission show the number of bets on VIX futures doubled in this period, with speculators heavily betting on low volatility.

On Monday, this bet failed massively: The VIX shot up to above 37, the highest since August 2015, from 17 the previous day. Research suggests short-volatility strategies can fuel dramatic reversals in stock markets as investors scramble to buy back the asset they sold in the first place—in this case, volatility. The fact that VIX futures surged right before stock markets closed is a sign of this, analysts said.

“Monday’s systematic selloff seems to me to be an unwinding or deleveraging or those short-volatility strategies,” said David Lafferty, chief market strategist at Natixis Investment Managers…..”

“Context Matters. The Stock Market Drop Is Less Scary Than It Seems”

“It can be easy to be misled by big point swings after a long period of quiet in global markets.

If measured by news headlines, you might assume these are dire times in the financial markets.

There is a “market meltdown” in the United States and “ugly, ugly scenes”in the European exchanges. Evidence of higher wages was “whacking”global markets last week, while higher bond yields threatened to “topple” a multiyear rally. On Friday, the Dow Jones industrial average fell by 666 points, as if scripted by a devilish hack, which was followed by an even steeper decline Monday, amid erratic trading.

There is an important idea to keep in mind at a time like this: Take the long view.

This market decline so far has returned the market roughly to its level in mid-December, less than two months ago. The 7.8 percent drop in the Standard & Poor’s 500 over the last six trading days is similar in scale and speed to drops in January 2016 and August 2015, neither of which left lasting scars, and is short of the 10 percent drop that would qualify as a market correction.

But some common cognitive errors are making this sell-off seem more dramatic than it is. And the reasons behind it may be more benign than it seems at first glance.

Media coverage frequently emphasizes moves in the Dow Jones industrial average. But you probably developed your intuition for how to interpret those numbers at a time when the index was much lower.

The Dow fell by 1,175 points Monday, which represents a quite large 4.6 percent decline. But while it was the biggest single-day point decline, there were steeper percentage declines on several occasions during the global financial crisis and its aftermath, not to mention the 508- point drop in the Dow in 1987 that represented a 22.6 percent market crash.

At a minimum, update your mental calculus of what constitutes a “big” market swing. Even better, focus on percent changes rather than point swings in an arbitrarily constructed index….”

“I’m a financial planner, and this is my best advice for what to do when the stock market crashes”

By Jeff Rose at Business Insider on February 7, 2018

“If you are someone who watches your portfolio closely, you probably noticed an ugly sequence of events playing out the last few days. The Dow Jones Industrial Average dipped down to a shocking recent low on February 6th, only to start climbing back up another 1,000 points as of this writing. Meanwhile, the S&P 500 took a similar swan dive at around the same time, although the market appears to be climbing back up as we speak.

And, so it goes. If you’re been investing for decades already, you’re already accustomed to these occasional dives and even the rare-but-scary full-on recession. And you already know that, like it or not, climbing markets tend to correct themselves at the worst possible times.

But, what if you’re a child of summer – or someone who has been investing for less than a decade? What if you opened your retirement account in 2009 when the Dow Jones Industrial average dropped to a low of 6,443.27, meaning you have only watched your portfolio climb since its inception?

Or, what if you’ve been investing long enough but still can’t stand to watch your hard-earned money disappear dollar-by-dollar?

In that case, you might be in a serious state of panic, wondering what you should do next.

Please, allow me to explain why you shouldn’t be freaking out at all – and why you may even want to quit watching your investments altogether. In lieu of panicking, here’s what to do instead….”

This stock market crash is a good thing, ringing some of the excess froth out of the market and bringing asset prices closer to fair value.

Read: How To Profit From Cyclical Investment Markets