WEALTH IN LIFE AND DEATH

Wealth Inspiration; The Rules of Wealth Include More Than Money

This has been a difficult year, with the death of both my dad and mother in law. Fortunately they were both quite old and lived life fully. I imagine that neither, if asked, would express many regrets. In spite of that, it is still difficult to lose those that you love and their deaths caused me to look inside and review how I am living my life.

Beautiful Reminder of My Mother-in-Law

While visiting my father in law, he invited Jr. Carina and me to take any of her old jewelry. I didn’t expect much as I never saw her wear more than a wedding ring. When we went to her jewelry drawer, it was overflowing with costume jewelry. After looking in that drawer, he opened another drawer and we were completely surprised. There was a valuable gemstone bracelet, a golden necklace, and several expensive rings, among other pieces.

I did not seen her wear any of the jewelry during the decades I’ve known her. My father in law didn’t remember her wearing it either.

In the airport on the way home, I remarked to my daughter that it was sad and a waste that she never wore her beautiful jewelry. Jr. replied, what makes you think it was a waste? In response I mentioned that she missed out on the pleasure of wearing and enjoying it. Jr. Carina, wise beyond her years said that maybe she enjoyed buying it and knowing that she had it. Just because I thought she missed out doesn’t mean that she didn’t enjoy having the jewelry in her own way.

My values are not universal and it was presumptuous of me to assume that my mother-in-law shared them.

What is Wealth in Life?

My in laws were not wealthy. They lived a middle class life enjoying one another, splurging on a play in New York occasionally. They lived in the same apartment their entire lives. On occasion they took a vacation. Their major extravagance was frequenting the local restaurants and going to a weekly movie. By all accounts, they did what they wanted, were deeply in love for over 60 years, and had a very happy life. Their two sons, my husband and his brother are both successful on their own accounts with their own families.

One habit my mother in law practiced was saving part of every paycheck. In fact, after reading my book How to Get Rich: Wealth Building Guide for the Financially Illiterate, my father in law said to me, there’s nothing very surprising in here, just really good common wisdom. It’s great for someone struggling or starting out. My in laws lived in accord with their values and spent on what mattered to them.

My in-laws are the personification of wealth. They lived sensible lives, saved a bit, and enjoyed themselves along the way.

Going through a loved one’s possessions is a poignant reminder that we all will end up the same.

Ultimately, over-focus on acquisition and money doesn’t make any difference. All your stuff and all your money are ultimately of no value. 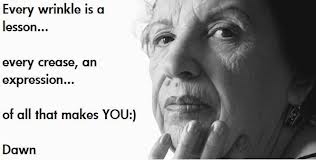 Step outside your routine for a bit. Allow yourself to enjoy all the pleasures and wealth you already have.

How’s the view out your window? Do you use and gain pleasure from your belongings? Are your friends and family a part of your life? You may be wealthier than you think. Continue to work towards a better life, but in the meantime, don’t forget to enjoy the now. You will never get it back.

image credits; google images_ style has no size and in between athlete