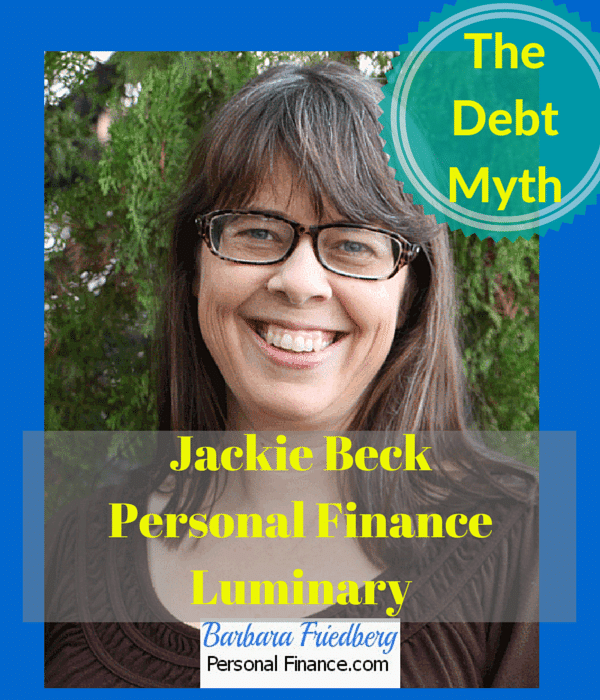 Welcome to an inside look into some of the most important personal finance luminaries online, Jackie Beck of The Debt Myth. These influential people educate and entertain others about money topics. From authors to podcasters to writers, these money mentors are working to raise the level of financial knowledge and education.

I started out by blogging anonymously back in 2006. At first I just wrote a paragraph or so a day about something I’d learned or experienced – anything to take a step closer to my goal of whipping my finances into shape while also improving my writing. Along the way, I discovered just how much I enjoyed both writing and the personal finance world. And of course it’s been awesome to become completely debt free! I now help others who want to pay off debt and live a better life.

2. Your personal finance focus is in the ‘debt’ arena. Can you shed some light on why you believe Americans are so over leveraged with debt?

Lenders — businesses who make their money selling debt – have dramatically improved their marketing and sales pitches over time. And why not? Debt is super profitable. The more people you can get to borrow, the more money you make if you’re selling debt. So debt went from something people whispered about as sign that someone was irresponsible and bad with money to something that’s considered “smart”. It’s telling that debt is more often known as “credit”, and that people brag about their high credit scores.

But it’s not all on the lenders. People want to feel smart, and they see everyone else buying things with debt, so it seems normal. It may not even occur to folks that there’s another way. (I know it didn’t occur to me for the longest time.)

Debt Is Not Forever-How to Live Debt Free>>>

We’re also pretty good at talking ourselves into things. We think things like “Why should I keep driving this car that’s going to need work soon when I can have a shiny new one instead?” Or “Why should I rent when ‘everyone’ knows it’s better to buy a house?”. Or we believe we can make huge profits in real estate, like others have done. Maybe we feel like debt is our only choice during emergencies. In general, it seems easier to borrow than to save up. It doesn’t matter that we’re paying a little (or a lot!) extra by borrowing.

The only problem is, a whole lot of things can go wrong when our money is already spent before we even get it. We think we can borrow to buy a car, and that we’ll never lose our job or become disabled. We real estate will always go up. We believe we’ll graduate from college, get a job in our field, and never want to do anything else. We all believe we’re the exception, even though by definition that’s impossible.

In other words, we want the things we want, when we want them. We believe using debt is a smart way to get them. Popular culture perpetuates that notion.

3. Describe your debt app, what it does, and how readers can get it.

My app is called Pay Off Debt, and different versions of it are available for iOS, Android, and Kindle. The iOS version has the most features, but in any case the app’s all about helping people set up and use a debt snowball. It’s an extremely effective way to systematically pay down debt over time.

The app is all about keeping you motivated and allowing you to see your progress. It also lets you play with the numbers to figure out the difference paying various amounts toward you debt could make – in other words, you can use it to answer questions like “If I send in an extra $20 every month from here on out, how much faster will I get out of debt?”. People who thought they could never get out of debt are often surprised at just how quickly it could be possible if they start tackling it now. You can read more about the app and get the directs link to it by clicking here. Many similar apps are free, but Pay Off Debt isn’t because I don’t believe in nickle & diming people with monthly fees or in trying to sell people loans and credit-related services like so many of the so-called free apps do. I want people to get out of debt, not get further into it. And I want them to be able to use everything in the app without paying extra.

4. Now for the details about the debt app. Did you create it yourself or hire someone to create it for you. Describe the process from start to market.

When I got my first iPhone I started poking around the Financial apps that were available. There weren’t any debt snowball apps at the time, which seemed like an opportunity to me. I figured there were probably other people out there who wanted to obsess about paying off debt as much as I had when I was paying off my student loan.

I already had experience with software testing, technical writing, instructional design, and graphics, so I figured I would learn to code and create an app. It’d be fun, right?

Then I slapped myself upside the head and asked what I really wanted out of an app: Did I want to spend a bunch of time learning to code, or did I want to bring a product to market quickly? Turns out that I wanted to get the app out there.

I asked around and got the name of a company in Russia who’d done a good job with a friend’s app. I wrote up a detailed software specification, got a quote that seemed reasonable, and just went for it. I figured the worst thing that would happen is that I’d be out a bunch of time and $1500 or so. The cost was low because the very first version of the app was simple – it had the bare minimum required to make it work. I also did a lot of work on it myself: providing graphics, figuring up the math formulas, and testing.

My goal was to just get the first version out there quickly without any bugs. We went through several builds and I did a bunch of testing and tweaking, until it was time to submit the app. I signed up for the Apple Developer’s program, and then they submitted it for me. The very first version was actually rejected by Apple, but we added a notification message and the next version was accepted. Once it was live in the app store, I began notifying the review sites and sent out a press release.

Sales were great right off the bat, and I made back my investment and then some in the very first month. A similar app went live just before mine did, but that was the only competition. It was early days in the app store, so it’s nothing like today. I wouldn’t recommend the “just put it out there and hope” method to someone trying to create an app today, but it worked for me.

I quit my job about a year ago, retiring from the employment world, so things are different now than they used to be. Previously I’d get up, work for an hour or two on my own things, go to my full time job, get home, and work for about 3 hours on my own stuff again, then relax. Plus I worked weekends on The Debt Myth Blog and the app.

Now though, I split my working time 3 ways: part on Pay Off Debt app, part on blogging, and part on the Destination Debt Freedom program that I’m doing with a partner.

A typical day for me goes like this: wake up, eat breakfast, walk the dog, swim (during the summer, otherwise walk longer), work for a few hours, eat lunch, work for a couple more hours, and relax with my family. We like to read, watch Netflix, travel, go out to eat, and play Ingress. I typically do that 6 days a week, taking one full day off……