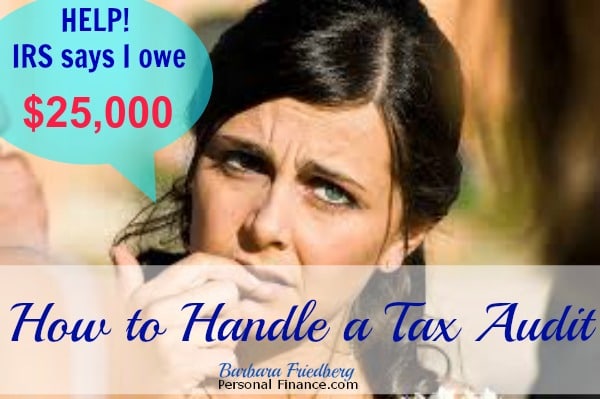 The thick IRS letter arrived and I assumed it enclosed the tax forms I ordered. I was wrong. The letter contained a list of 5 sources of income that were not included on my 2010 tax return. Total bill due the IRS including penalties and interest, $25,000.00.

Ironically, 2010 was the year I was exceptionally familiar with the tax law as I served as a VITA volunteer tax preparer for the IRS. What was going on?

I caught my breath and raced upstairs to my home office to look for the 2010 return. Fortunately, even after a cross country move, I found the file containing the returns and a back up file.

Call to the IRS-Handle the Tax Audit

After failure to reach my accountant (I guess 9:30 PM is a bit late for an accountant to be working), I decided to call the IRS early the next morning. I was quickly transferred to someone in the audit department. This helpful and confident man walked me through every item in the letter. We discussed what information the IRS needed. He gave me details and tips to avoid problems with this audit.

“Don’t sign at section one as that admits to owing the tax!”

I am in the midst of the arduous process of going through each of the claims and providing support that shows I have complied with the law and do not owe any additional tax.

{When handling with a tax audit, stay calm!}

Why was I Targeted for an Audit?

The major culprits were two certificates of deposit (CD) that came due in 2010. Last time I checked, as long as I paid the tax due on the interest received on the CDs, which I did, I was in compliance with the IRS. Here’s the problem, the principal received when the CDs came due was listed on my aggregate brokerage statement. I didn’t include this repayment of principal as I didn’t think it was necessary.

Fortunately, the fix for this oversight is to prepare an amended schedule D with the cost basis and sales price listed on the CDS. Since these amounts are the same, no tax is due.

There were three more items on the audit. Two of them dealt with education credits. The IRS wanted to make sure we incurred the tuition costs for which we were claiming a credit. Another quick search revealed I had no idea where my receipts were for the tuition we paid on behalf of Jr. Carino for her college expenses in 2010. No problem. After a quick call to the University, the assistant controller emailed me a receipt of tuition payments.

The final two issues regarded an IRA rollover. I’ve been combing IRS documents for two days. Have you ever tried to make sense of these booklets? I don’t know who they are written for, but it is not the general public.

As far as I can tell, without revealing too many details, there is no tax due on those rollovers either.

According to my calculations, we don’t owe anything and we have back up and documentation for all the contested items.

Tips for Handling a Tax Audit

Audits sometimes happen. Usually they begin with a letter in the mail. In fact, I’ve been through this before and am confident that our issues will be resolved after a lot of research, documentation, and letter writing. These tips will serve you well in handling your records and preparing you for the dreaded “audit letter”.

Life throws you curve balls when you least expect them. Be resilient and tackle the issues head on. You will get through the tax audit. Accept that it will take time, organization, and follow through.

10 Most Im portant Things to Know About a Tax Audit; IRS Tax Attorney

How to Handle a Tax Audit; Smart Money

How to Handle a Tax Audit; Financial Highway

How to Handle a Tax Audit; Bloomberg  Businessweek

Have you ever gone through a tax audit? How did it work out?