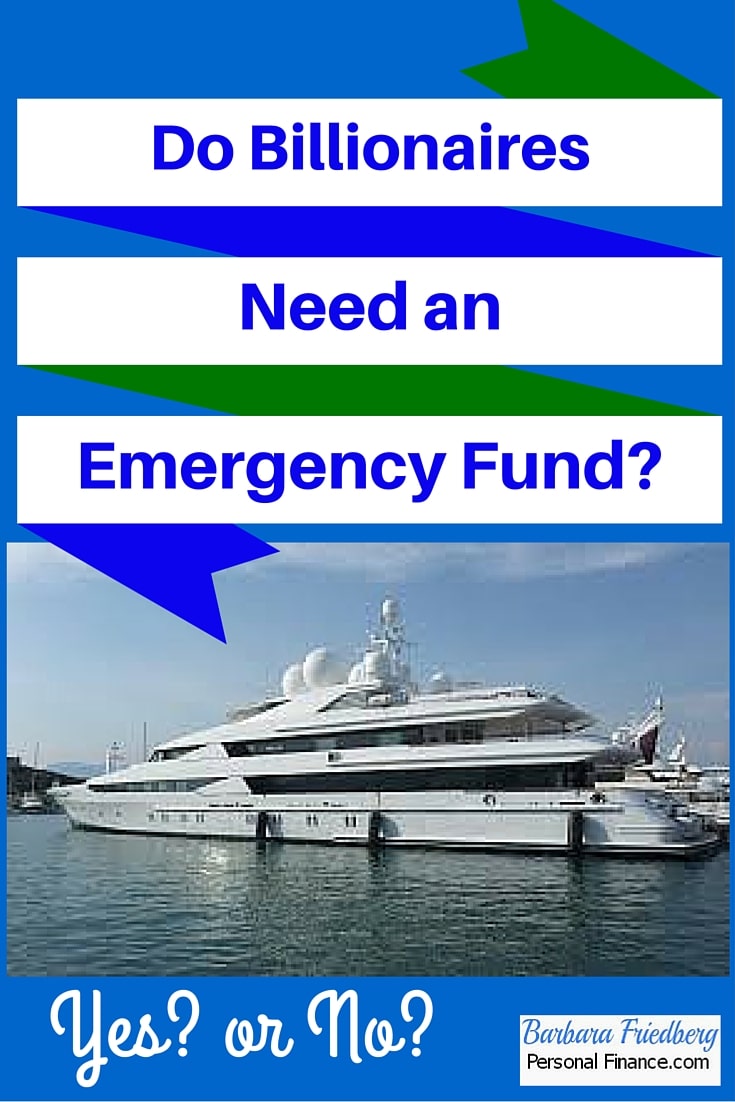 Do Billionaires Need An Emergency Fund?

How Billionaires and the Uber-Wealthy Went Under

If you think billionaires don’t go broke, think again. Lottery winners, professional athletes, actors, and others with tremendous wealth have lost it all.

The interesting thing about money, not matter how much you have, if you spend more than you make or swindle others, at some point you’ll wind up broke.

How wealthy do you think the Madoff family is today?

According to a Time.com article by Sam Frizell last year, “Where are Bernie Madoff and His Inner Circle Now?” The once wealthy Madoff family isn’t doing too well. Bernie Madoff, the head of an elaborate Ponzi scheme which swindled the rich and famous lost not only their wealth, but the lives of family members as well.

Convicted of securities fraud, investment fraud and a litany of other charges, Bernie Madoff is currently serving 150 years in federal prison and forteited $17.179 billion.

Bernie’s wife, Ruth lost $80 million in assets and is living in a rental condo. Mark, his eldest son took his own life. Andrew, another son, died of lymphoma. Bernie’s brother, Peter is serving 10 years in federal prison and gave up everything.

Iceland’s second richest man, a brewer by trade, went from billions to nothing. He invested in Icelang’s banking system, and lost, according to FNResearch.com’s “11 Billionaires Went Broke: How Safe is Your Retirement?” At one point, Gudmundsson was $1.4 billion in debt. After bankruptcy, his net worth was zero.

David Siegel and his wife Victoria gained notoriety when they began construction on what was arguably the largest home in America. Siegel, the owner of the largest time share company in the US, Westgate Resorts, ran into financial difficulties during the economic downturn of 2009-2011.

How could David Siegel, billionaire owner of the largest time share company in the world not have back up savings when trouble hit? Bloomberg BusinessWeek  chronicled his downfall and rebound in “Versailles, the Would be Biggest House in America“.

According to the inquisitr.com, in 2008 Siegel was worth over $1 billion, in July 2014, he was reputed to be worth $100 million. Although his fortune didn’t completely vanish, $100 million isn’t a billion. Also, he’s been plagued by other troubles, with the unfortunate recent death of his daughter Victoria.

Allen Stanford Dug His Own Hole

Stanford was born a billionaire, and he managed to lose it all. Another criminal, Stanford created fake certificates of deposit (CDs) and conned more than 20,000 investors to buy. Then he took the proceeds and transferred them to his own offshore account. Stanford is now paying for his fraud with a 110-year prison term for stealing over $7 billion from investors.

Why Even Billionaires Need an Emergency Fund

For David Siegel, business was continuing as usual with his time-share expansion funded by a profitable business model. Meanwhile, after the timeshares were sold, the property developer bundled the mortgages’ together, securitized them and sold the new investment products to investment bankers to market to the public.

Things were going along great-until they weren’t. In 2008, Siegel couldn’t sell a $300 million securitization and pay off the primary lenders, his credit dried up, and he was in the midst of a huge Las Vegas building project. Siegel’s funding dried up in the midst of the sub-prime lending crisis and mortgage meltdown, a massive economic event.

Yet, no one is perfect at decision-making or predicting the future. Economies collapse, recessions happen, the winds of business change. You do your research and a decision doesn’t turn out the way you planned. In other words, life is imperfect and no one can predict the future.

Certainly in the case of criminals, there’s a different situation. The ponzi scheme operator and the fraudster is simply acting on borrowed time. Sooner or later they will likely get caught.

Billionaires are different than simple millionaires or the common Joe or Jane. On the up side, they have greater access to capital, can take on bigger projects. The scale of their resources may lead to grander wins. And when a billionaire falls, they must have done something really wrong to blow through that much money.

Not only are there wealthy folks without savings, there are high income earners plagued with debt and a negative net worth. Without getting into the psychological reasons for this, what does this mean for those of us without a $1,000,000,000 net worth?

No Matter What Your Income Level is – You Need to Save

Have you had those periods where unplanned expenses crop up? We had a costly ‘unexpected’ fender bender this year. We also had several other surprise large expenses this year. Our emergency fund kept us from borrowing to meet these expenses. We’re now in the process of building it back up.

Everyone needs extra cash to fall back on when hard times hit. Financial setbacks happen to everyone. Not only are the poor susceptible to financial problems, but high income earners who overspend and don’t save can run into financial problems as well.

There is research that substantiates the importance of having emergency funds to fall back on. Whether you have a billion dollar net worth or are working towards the $10,000 mark, the lesson is the same.

Live within your means. No matter what your net worth or income, don’t risk more than you can afford to lose. That means if you’re an investor with a $100,000 net worth, don’t bet it all on a ‘can’t miss’ investment opportunity. If you earn $80,000 per year, save and invest at least $800 per month.

Emergency Fund Action Steps-For Billionaires and the Rest of Us

What Others are Saying

21 Strategies for Creating an Emergency Fund at Zen Habits

What tips do you have for building an emergency fund? Have you dipped into yours recently?

How Often Should I Check My Investments?