Universal or Variable Life Insurance; Should I Buy?

Do You Need Whole, Universal of Variable Life Insurance?

Q: In what situations is it better to have universal life, variable life, or other investment-based insurances?

Have you heard of the “reverse pitch”? That’s when someone asks you for something and you reverse and ask them for something back.

Since Ben was a former insurance agent and did a great job comparing term and whole life insurance, I reverse pitched and asked him to research and write the response to his own question. He did a great job, probably a better than I would have done.

If you’ve ever been approached to buy Universal or Variable Life Insurance, you must read this article.

Should I Buy Universal or Variable Life Insurance?

In a previous post, I compared term life insurance and whole life insurance. I did so because, believe it or not, one isn’t inherently better than the other. Just like many other financial tools, it depends on your goals and financial situation, despite what personal finance “gurus” might say. Today, we’re going to go one step further and discuss other forms of permanent life insurance that are sometimes mistaken for or lumped together with whole life.

The point of all permanent insurance policies is that the excess of premium payments above the cost of the insurance itself is credited to a cash value portion of the policy.

But there are definitely differences in how all that happens and what happens to your cash value.

With whole life insurance, the premium stays the same for the life of the policy, as does the cost of the insurance.

However, with universal life, the cost of insurance is based on an annually renewable term life table, meaning that over time, more and more of your premium is going to pay the cost of the insurance (because as you age, the insurance part gets more costly because your chance of dying increases) and less and less is going to the cash value. That sounds pretty shady right off the bat, doesn’t it?

Universal life was created with the idea that the “investment portion” of the policy would increase due to rising interest rates and stock prices. Thus the increased profit on investments would cover the growing premium cost.

This little trick was shifting a greater portion of the insurance cost to the policy holder. 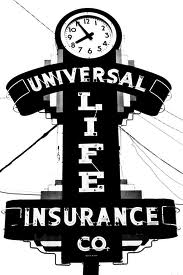 If the expected increase in value (from growing the investment portion of the policy) doesn’t materialize, the cost of the policy can actually decrease the death benefit.

The advantage of a universal life policy is that the policyholder has more flexibility with the premium and death benefits.

For example, the policyholder can decrease her premiums for a time (down to a minimum) if she’s unable to make the regular premium payment, and then move it right back up. The death benefit can also be increased (subject to insurability) and decreased at the policyholder’s request.

So are there situations where this might be a good alternative to whole life or term?

Yes, but not necessarily on an individual level. Universal life seems to be more suited for businesses where a buy/sell arrangement is made, key person coverage is needed, or as an added benefit for executives. Unfortunately, I’ve seen many young couples get suckered into a UL policy by an agent (usually an auto insurance agent who has no idea what he’s selling), so it’s important to understand that there aren’t many situations where an individual needs it.

The policyholder takes on much of the risk, because the cash value and the death benefit can fluctuate with the market. You can get a guaranteed death benefit, but you have to pay more in premiums. Because your money is directly invested in securities, it’s actually considered an investment (whole life is not) and is governed by securities laws.

When would a variable life insurance policy be right for you?

Basically, if you’re already maxing out your other tax-deferred investment vehicles and you’re fine taking on the risk. Although it is risky from the life insurance perspective (if the market crashes, so does your family’s future), it obviously shouldn’t be used purely for the insurance, rather as a tax-efficient tool with an insurance benefit.

Variable Universal Life (VUL) is what happens when universal life and variable life have a baby. It combines the advantages of both of its parents to form a much more complex tool that can be beneficial, but only in the right hands.

Much like with universal life, the cost of insurance increases as the policyholder ages, but the premium payments are flexible. And just like variable life, the cash value can be invested in the separate accounts rather than the general account, giving the policyholder a little more investment control and a higher risk-return component.

The disadvantage of VUL is its complexity.

There are many added expenses due to dealing with separate accounts, which combined with the increasing cost of insurance, can cause the policy to be doomed from the start if it’s not planned and funded properly. This is especially an issue later if the intended use of the cash value is for retirement. If you don’t fund it enough, it lapses. If you fund it too much, it becomes a modified endowed contract and loses its tax-deferred status (although it’s important to note that any permanent life insurance policy can become a modified endowed contract if it’s overfunded too much.) This was meant to deter people from taking advantage of the tax-efficiency of permanent life insurance.

So, as you can tell, none of these are very popular with many personal finance personalities and bloggers. But I would argue that is mainly due to the complexity of their nature and the fact that the market of people who would benefit from them the most is so much smaller than with other forms of life insurance.

From my research and from my experience as an agent, there are advantages and disadvantages to each, meaning none of them are inherently bad products. However, it’s important to reiterate that the average Joe and Jane aren’t going to benefit from these very much due to situation and financial ability to fund them properly.

Barbara’s comment: In most cases it’s best to separate investing from insurance. Invest with retirement accounts and/or investment brokerage accounts. Buy inexpensive term life insurance to protect your dependents if you die.

Be knowledgeable if someone tries to sell you a financial product and always consider the fees and commissions you will pay to the seller.

Ben Luthi is a personal finance blogger, freelance writer, and the owner of Wealth Gospel (and a former life insurance agent).  He is passionate about helping others align their behaviors with their goals. He’s a chips and salsa connoisseur and his spirit animal is Warren Buffett.

What type of insurance do you have? Have you ever considered whole life, universal life, variable life, or other investment-based insurances?


How to Build Wealth with Money Strategies + Investing Books