Home » Advanced Investing » What is the Trump Reflation Trade and Should I Care? »

What is the Trump Reflation Trade and Should I Care?

I’ve enjoyed economics ever since I majored in the field at University. During the last century, I’ve seen rampant inflation – too much money chasing too few goods – leading to exploding prices. I’ve also lived through the recent low inflation rates and the brush with stagflation and deflation.

It’s all over the news, but reflation isn’t as clear cut as the inflation, stagflation or deflation themes. 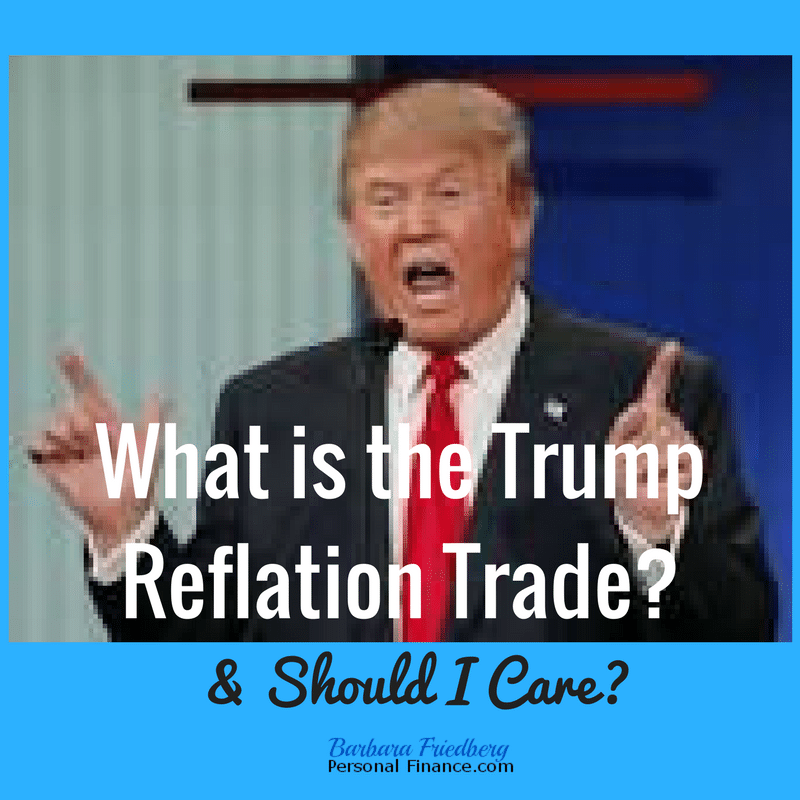 But wait, there’s another definition for reflation. Reflation also describes the initial phase of an economic recovery after a period of contraction.

Reflation policy has long historical roots. Since the early 1600s, American governments have tried to restart failed business expansions or attempted to halt an economic collapse after a recent boom period.

Yet, despite all the good intentions, it’s difficult, if not impossible to short circuit the contraction phase of the business cycle. In fact, some academics think that government intervention hurts the recovery and might delay its progress.

The business cycle waxes and wanes and it’s unlikely that the dance will ever end.

But this reflation definition still doesn’t explain the Trump or other reflation trade.

What is the Reflation Trade?

What is Trump’s Reflation Trade?

A recent visit to the Financial Times explained this concept in an article by the same name. FT.com states “Investors are betting Trump’s policies will lift U.S. inflation and growth, hurting bonds.”

Trump’s reflation trade is based upon promises made by President Trump:

In summary, the U.S. is expecting economic stimulus under Trump’s proposed policies.

So, that’s the reflation part of the Trump plan. Next, is the Trump reflation trade. The idea is to invest in order to capitalize on these expected reflationary policies.

Read about; TIPs – An Investment Guaranteed to Keep up With Inflation >>>

Should Investors Jump on the Trump Reflation Trade?

“We’re definitely seeing more sustained caution about the new president’s ability to turn his rhetoric into legislative and regulatory action,” said Cameron Brandt, director of research at EPFR Global, which analyzes flows in more than $17 trillion of mutual funds. “There are plenty of signals that people want to see something tangible.” ~Bloomberg.com

In the above Bloomberg.com article, Brian Chappatta implies that the economic future is murky. Questions remain regarding Trump’s ability to slash taxes, create massive infrastructure projects and goose economic growth.

So, if President Trump’s ambitious plans don’t come to fruition, how should investors react?

Unless you are an active trader or speculator, you shouldn’t worry about making the reflation trade or any short-term investing strategy. You’ll be competing against complex computerized algorithms and professional traders who are adept at capturing micro movements in investment markets.

Bonus; What is Multifactor ETF Investing? And Is it Worth a Try? >>>

So, now that you understand the meaning of reflation, doesn’t mean you should invest on that knowledge.

Create a sensible investment strategy, based on your risk tolerance, age and future goals. Then stick with the approach. Or, if you must, adjust it minimally to reflect any changes in your life. Trying to outsmart the economy is difficult, even for the most seasoned investors. In most cases, you’ll end up losing more than you gain. Thus, leave the reflation trade to the professionals.