Home » Economics » The DOW-What Everybody Ought To Know »

The DOW-What Everybody Ought To Know

What the is the DJIA (or Dow) anyhow?

Why is this topic important?

When I was teaching investments at Santa Clara University, a frequent question from the students was, “What is the DJIA (DOW)?”

The DOW is all over the news, so the assumption is that the DOW must be a really important business indicator.

This article delves into the Dow Jones Industrial Average or DOW, whether it is important, or not, and the impact of the WSJ headline, “Dow Makes It Official: U.S. Firms Only”.

You’ll become a more knowledgeable investor by understanding the DOW-even if it won’t make you rich. 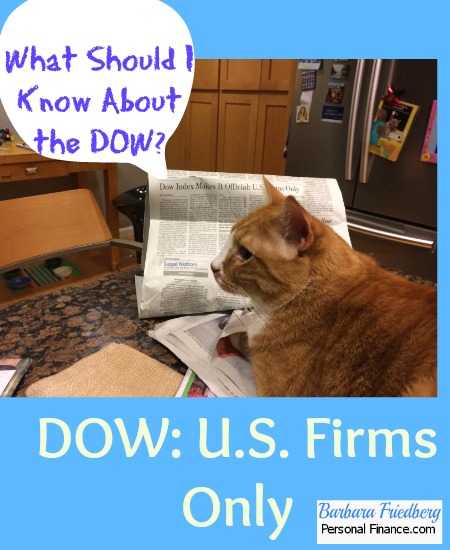 What is the DJIA – DOW – Dow Jones Industrial Average?

The Dow Jones Industrial Average is one of the oldest proxies for the U.S. stock market. It’s a price weighted (price multiplied by number of shares outstanding) average of 30 important stocks which are traded on the New York Stock and Nasdaq exchanges. This metric was invented by Charles Dow,  Edward T. Jones, and Charles Bergstresser in 1896 (They also founded the Wall Street Journal in 1889).

The DJIA is publicized world wide and regarded as an indicator of the overall U.S. stock market. It contains well known companies such as General Electric, Microsoft, Coca-Cola, and Exxon.

There’s no “quantitative” metric for choosing DOW companies, moreover the members are selected based upon the “reputation, growth, and prominence of the companies” according to the WSJ article.

When people ask the question, “How did the market do?” they are frequently referring to the value and performance of the DJIA.

Is the Dow Really Important Today?

With only 30 stocks, one might believe that this index can’t possibly have value. After all, the stock markets contain thousands of individual stocks, how can 30 be representative?

Although not perfect, the DOW is the most widely quoted index worldwide. The 30 DOW members represent a variety of industries and are among the most important companies in both the U.S. and worldwide.

To validate the representativeness of the DOW, just compare the price of the DOW with that of the Wilshire 5000, the most comprehensive index of the U.S. stock market. According to Paul Kosakowski, in “Why The Dow Matters“, Investopedia, there is a close correlation between the DOW and the Wilshire 5000.

In reality, a better indicator of the overall U.S. stock market would be the Wilshire 5000 or S & P 500, but for a general picture of the health of the U.S. markets and subsequently the U.S. economy, the DOW is certainly useful and widely regarded.

What Is the Weakness Of the Dow?

There are more than 10,000 public companies in the U.S., thus the DOW is having a difficult time continuing to claim that it represents “the market”. Today, “the market” claim is more often owned by the “S & P 500”. The S & P 500 is taking over as the preferred benchmark of the overall U.S. stock market.

I prefer looking at the S & P 500 and the Wilshire 5000 because they are more comprehensive. After all, the DOW doesn’t include smaller companies. By any account, it’s tough for an index of 30 to satisfactorily represent 10,000 public companies.

The DOW is kind of like that favorite uncle who knows everything about cars….. from the 1960’s. You probably don’t want him to advise you on which model to choose in 2015.

What Companies Are Included in the DOW?

How Momentous is a U.S. Firms Only DOW?

This is not as big a news flash as it seems. From its inception, the Dow has represented U.S. companies. This new decision is simply reaffirming that member companies home’s are in the U.S.

Many U.S. companies, looking to cut costs are moving their headquarters abroad. This process is called an “inversion” and works like this; the U.S. firm buys an overseas company and changes it’s legal home to the lower-tax country of the acquired company. The DOW component companies will be dropped from the index if this happens. Only one company, Pfizer, has considered an inversion. This occurred during Pfizer’s attempt-which subsequently failed-to buy the U.K. company, AstraZeneca PLC.

How important is this issue? In reality, not very important. There are only $33 billion dollars in assets tied to the DJIA, in comparison with $1.9 trillion tied to the S & P 500.

Yet, this action raises several more global questions regularly discussed by the business community? Are the corporate taxes in the U.S. too high, in comparison with the company’s international competitors? If so, is this making the U.S. companies less competitive globally?

There are many individuals and companies rallying for a lower tax rate for U.S. companies. On the other hand, with the world growing smaller by the day and trade crossing boarders more frequently, this is an issue that requires depthful study and analysis.

Since the S & P 500 and other indexes don’t have this location requirement, in order for a company to be included in the index, the DOW’s decision has a reduced impact. I happen to agree with the notion that the tax laws need an overhaul and that companies should be rewarded for  keeping their headquarters in the U.S.

But whether the DOW requires member companies to remain incorporated in the U.S. or not, is really a non-issue.

The DOW is like an old dog (or cat), nice to keep around, comfortable and familiar, but without much impact on the day to day business of the U.S.

What are your thoughts about the DOW’s decision to only allow U.S. firms in its index? Does it really matter?