What does it mean for your personal financial situation that credit card delinquency rates are down?

According to a recent Los Angeles Times article,  by Walter Hamilton on August 13, 2013, credit card delinquency rates are at a two decade low! What does this mean? In plain English, more people are paying their bills and fewer are letting them go delinquent.

To put this figure in perspective, it’s been about 20 years, since the past due levels have been this low.

Is the reason rates are this low because I’ve been telling readers to slam credit card debt?

I’d like to take credit for this debt decline, but that would be a bit too narcissistic of me. 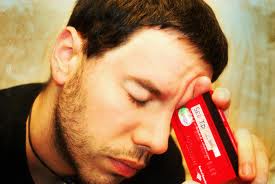 Get out of debt now!

Recent economic events; the mortgage meltdown and resulting credit crisis of 2008 and 2009 stunned many. Thousands lost their homes and jobs. In other words, consumers got really scared and realized, home prices don’t go straight up. Consumers found out that no money down home ownership is a stupid idea.

Consumers are On Track for Smart Money Decisions…. Maybe?

Does this mean that consumers have learned their lessons?

The recency behavioral finance bias suggests that we weight recent events more heavily than those in the past. If that’s the case, then we’re saving more and paying our bills because we remember the recent financial crises. This theory also predicts that once we forget about the financial problems of the recent past, we’ll all go back to over spending, over borrowing, and just living beyond our means.

Should we be dancing in the streets because only one half of one percent of credit card debt is 3 months past due?

Not just yet…. That same article states that the average person still has about $5,000 in credit card debt. That’s a lot of debt.

It Means Absolutely Nothing That Credit Card Delinquency Rates are Down

Take a look at the big picture. Carrying credit card debt is considered a normal part of life. According to Mintlife.com, 45 percent of Americans carry a balance on their credit cards. So even if your payment is not delinquent, if you’re like most Americans, you still have too much credit card debt.

Carrying a balance and paying credit card interest keeps your wealth from growing.

If most consumers started paying off their bill in full every month, that would be news!

What Matters About Credit Cards and Delinquencies?

So much of the financial news is blather. It’s just people spouting statistics and predicting the future. Does this information make you smarter? Does it make you richer? Of course not.

The first bank credit card was invented in the middle of last century. Before that time, if you had the money, you bought what you could afford. Plain and simple, if you didn’t have the cash for a new dress or a restaurant dinner, you saved up until you could pay for it!

Next time, before you mindlessly charge your dinner at Red Lobster, think about whether you really want to pay $35 (over the next several months) for a $20 dinner. The incessant charging of consumable assets like food, entertainment, and vacations and not paying for them in same month, is costing you thousands of dollars in interest payments. Wouldn’t you rather take that extra interest and invest it for the future?

Look around at folks several decades older than you. The ones that are financially comfortable and secure chose to take some of their working earnings and save and invest that money for the future. Those that carried a balance on their credit cards and failed to save and invest are struggling.

Try living a bit like your grandparents; pay cash, put a bit of money away for the future.

Live mindfully, spend thoughtfully and whether credit card delinquency rates are up or down won’t make any difference to you.

Do you pay attention to the news reporting about credit card debt? Are you average or do you pay your credit card bill off every month? Come on, tell the truth.